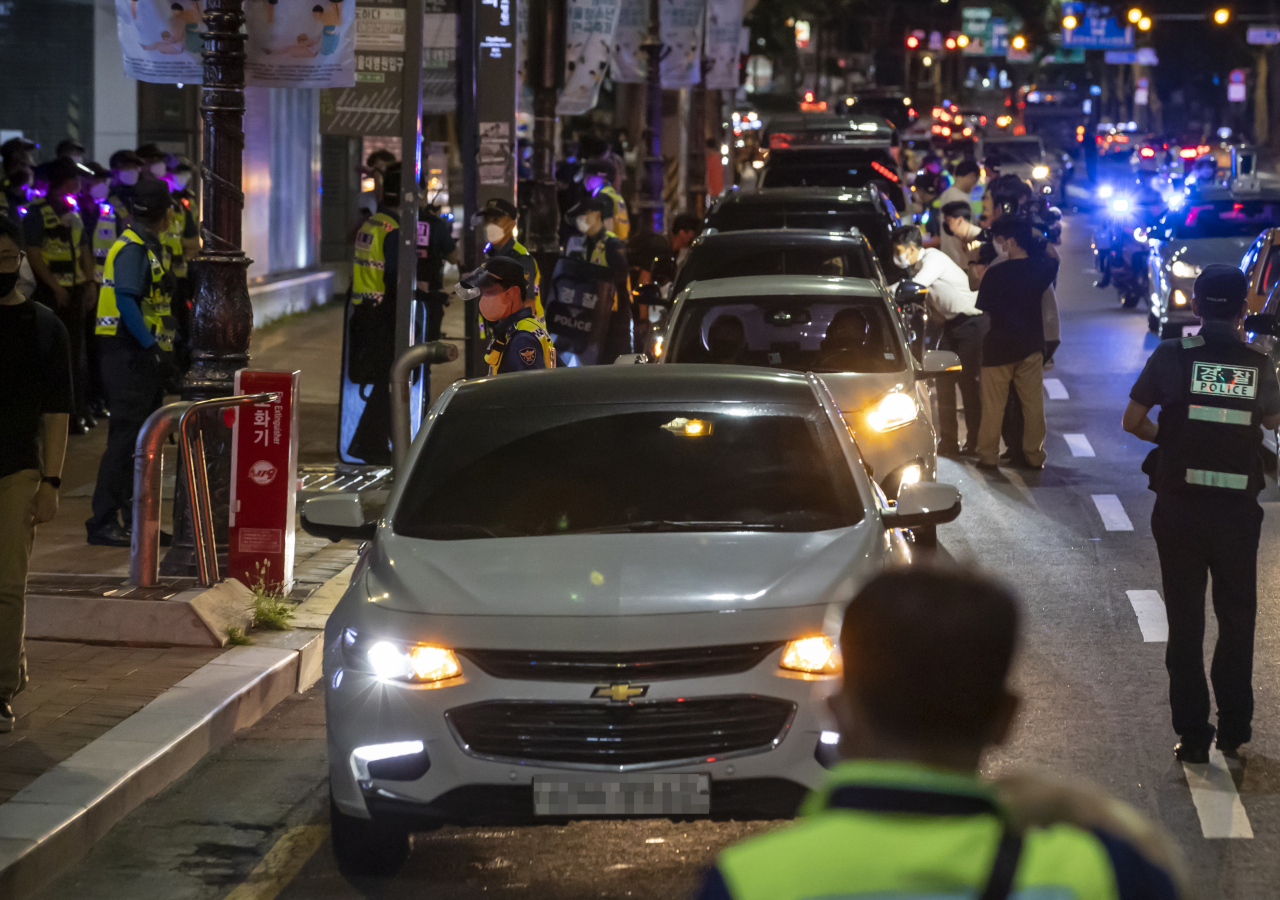 Hundreds of small-business owners took to the streets Wednesday night, denouncing the government for once again putting their livelihoods at risk in its drive to contain COVID-19 with strict social distancing rules.

With limits on private gatherings that continued since last year, coupled with the most recent minimum wage increase, small-business owners are asking the government for monetary support and to relax restrictions on business operations to boost consumption.

The group claimed 700 vehicles participated in the demonstration that started at 11 p.m. Wednesday but much fewer vehicles were believed to be actually present due to stern police response.

“(The government) sacrificed us, asking us to wait every time,” Kim Gi-hong, leader of the committee, said during a press conference held in front of Yeouido Park ahead of the rally.

“We demand to be cared for and to be allowed to sustain our livelihoods just like average citizens.”

The police deployed around 10,000 officers and installed 20 check spots along the routes of the protest, which was prohibited under Level 4 social distancing rules.

The rally ended without any physical clashes but the police warned it would take stern action if such rallies continued to flout social distancing rules. The committee was slated to stage another protest Thursday night.

Kim said the government essentially ignored their demands and neglected financial difficulties small-business owners face from shortened business hours and loss of customers due to the distancing rules and gathering bans.

From Monday, the greater Seoul area has been under the highest level of social distancing rules, with most other regions also having upped their restrictions Thursday as a response to South Korea’s worst-ever COVID-19 wave to date.

In the greater capital region private gatherings are limited to no more than four people until 6 p.m., and no more than two after 6 p.m.

“We pleaded and pleaded, but the government is not even attempting to talk with us,” Kim added. “Small-business owners are treated as guilty and cornered due to failed virus response from the government.”

A report the Ministry of SMEs and Startups and other government agencies submitted to the National Assembly in May estimated that small-business owners faced more than 1.3 trillion won ($1.14 billion) in revenue losses due to COVID-19 rules.

The amount rises to 3.3 trillion won if it included staff wages and rent. The calculation was based on changes in revenue from August 2020 to February 2021 of 677,941 businesses that faced restrictions from COVID-19 rules.

A recent decision to raise the minimum wage level for next year will only add to their woes, the committee says, as they will now be required to incur more losses by spending more on maintaining employment.

“Small-enterprise owners expected stability in minimum wage rate to vitalize their businesses, but with the raise, they have no choice but to cut the employment they have been barely able to maintain,” the Korea Federation of Micro Enterprises said in a statement Tuesday.

“In a situation where small enterprises have to pay for debt with debt, this raise will serve as a catalyst to start a vicious economic cycle by raising all sorts of costs, cutting the number of jobs and forcing businesses to shut their doors.”

A survey from the Korea Economic Research Institute released Monday showed 45 percent of small-business owners polled had to reduce their headcount in the first half of this year. Small-business owners claimed it will only worsen if their financial burden expands on maintaining or increasing employment.

The committee of small-business owners denounced officials for emptying the government’s coffers to boost private spending, even though ways to do so are largely futile as businesses open for shorter hours and are forced to accommodate fewer visitors.

“The government is spending its budget on increasing consumption instead of using it to compensate those who incurred losses,” said Rep. Choi Seung-jae of main opposition People Power Party who was present with the committee during the press conference.

While the government introduced a number of budget-backed measures to help small businesses recoup their losses, these measures were found to be only partially effective, as strict qualifications have made many ineligible for the funds.

The government is mulling another supplementary relief package of 33 trillion won in the coming weeks, but faced criticism of proposing an allocation of only 0.6 trillion won, or 18.2 percent, of the amount on compensating losses of small businesses.

Government officials have reassured the public they will appropriately compensate those who have incurred losses, but it is unsure how they will do so with such limited funds. It is estimated that around 1 million small-business owners would be negatively affected from the Level 4 rules.

The 0.6 trillion won from the supplementary budget, if executed all at once, would provide 600,000 won per small-business owner. According to the SME Ministry, small businesses in 2020 recorded an average operating profit of 2.75 million won per month, down 3 percent from before COVID-19 hit in 2019.

The government also remains fixed on its plan of distributing coupons and providing cashback on credit card transactions to boost consumption.